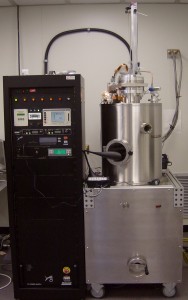 Purpose: To describe how to use the evaporator for Physical Vapor Deposition (PVD) by Electron Beam heating.  This is a custom built system designed by the cleanroom co-directors, Profs Joshua Folk and Lukas Chrostowski, and engineered by Doug Wong and Jim Mackenzie.  It features a load-lock loading mechanism and 8 evaporation sources.  We are naming it the DeeDirectors Evaporator.  This system is NOT automated and is to be used in FULLY MANUAL MODE only (at least for now).  This SOP is meant to be used by properly trained operators only.Introduction

The DeeDirectors system is a vacuum process system for Physical Vapor Deposition (PVD) of metals and non-metals, consisting of an electronics control rack, E-beam power supply, Cryo pump and compressor and a dry mechanical vacuum pump.  The system is oil free.

The electronics rack houses the Ion and thermocouple vacuum gauge controllers, the thickness monitor, Cryo pump temperature monitor and the E-beam power supply, including its controls for beam power, intensity and sweep.  While the system is interlocked for safety purposes, since it is operated in full manual mode, it is possible to cause downtime and minor damage to the system if not properly operated. 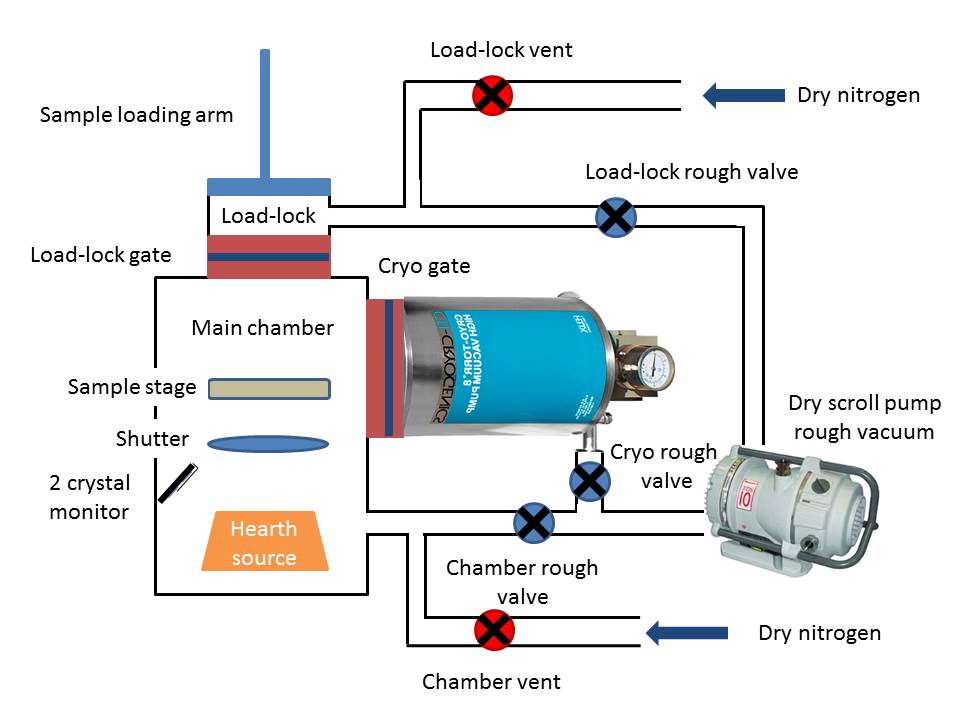 Figure 2 shows a schematic diagram of the evaporator.  The main chamber is normally kept under high vacuum while samples can be loaded through the load-lock chamber (loading is explained below).  The chambers are isolated from each other and from the pumps by sets of pressure activated valves.  During normal idle operation, both the load-lock rough valve and the cryo gate valve remain open; this ensures high vacuum in the main chamber and a few mTorr vacuum in the load-lock chamber.  All other valves are closed.

The main chamber is isolated from the load-lock through the load-lock gate valve.  This valve should only be operated when the load-lock pressure is less than 50 mTorr as read on the Lesker gauge (Figure 3).  In normal operation, only the load-lock gets vented to atmosphere to allow loading/unloading of samples.  Venting is done by opening the load-lock vent valve to let in dry nitrogen. 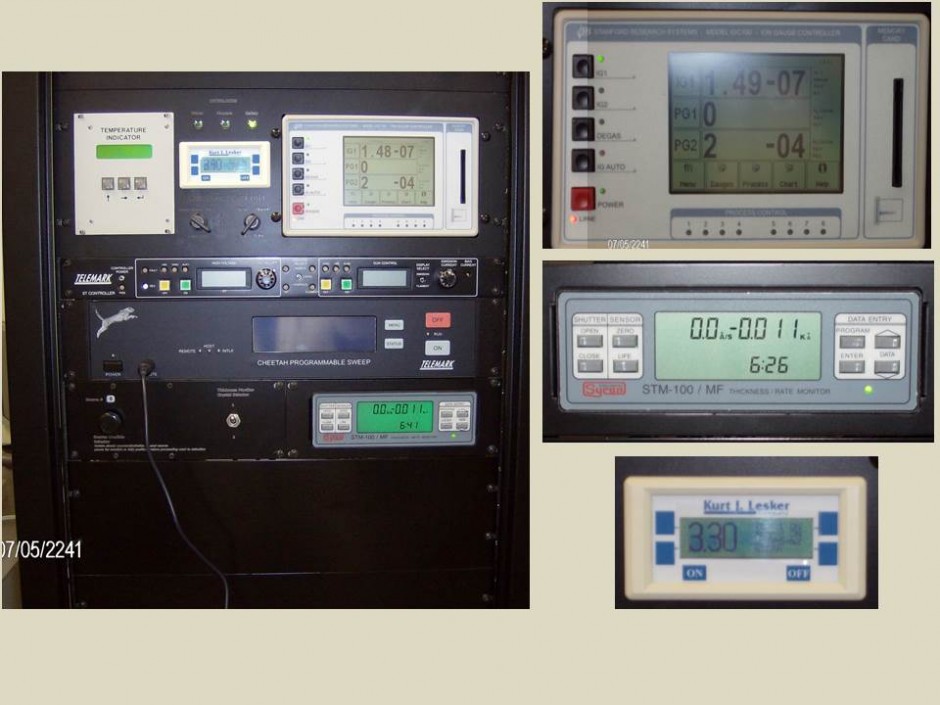 Figure 3 shows a picture of the electronics rack for the system along with larger pictures focussing on the ion gauge controller, the crystal monitor controller and the Lesker load-lock vacuum monitor.  The rack also houses the cryopump temperature monitor and the electron beam (ebeam) controller.  The ebeam controls are for the high voltage (HV), the beam current and the beam sweep mode. 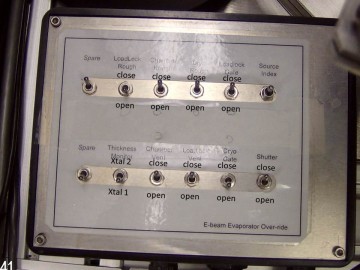 The evaporator valves, as well as the main and quartz crystals shutters, are operated from the control box shown on figure 4.  One needs to have a thorough understanding of the different chamber arrangements and the pumping scheme in order to safely operate the system.  Wrong operation can cause damage and downtime such as:

It is thus important to understand how the chambers are designed together as shown on figure 2. 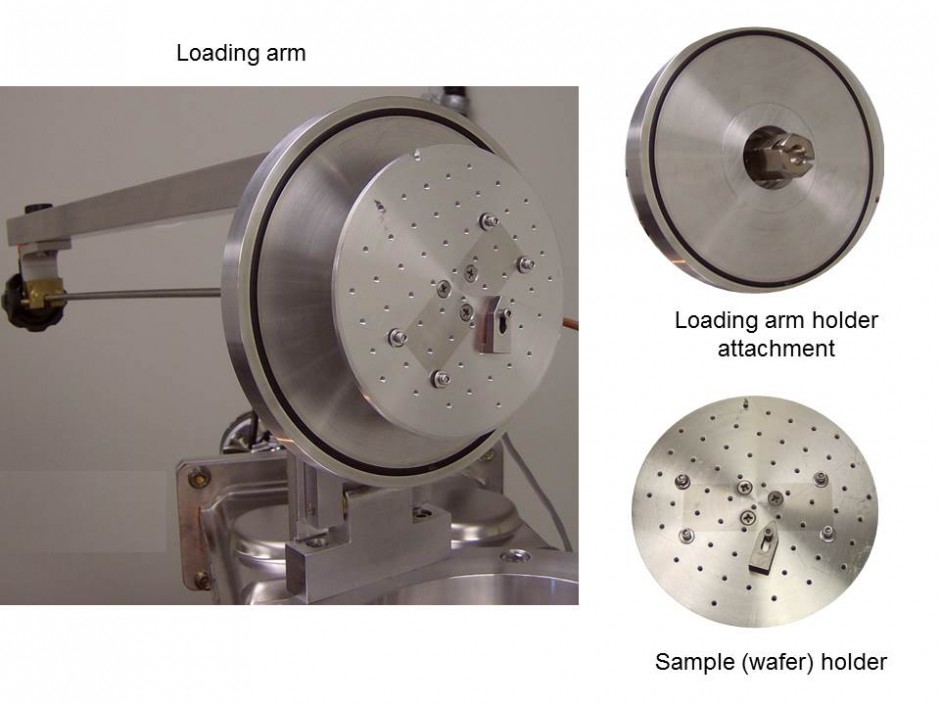 Sample loading is potentially the most difficult part of using the evaporator. Figure 5 shows the loading arm mechanism with the load-lock open.  The load-lock is opened, using the Valves and Shutters control box, by following these steps: 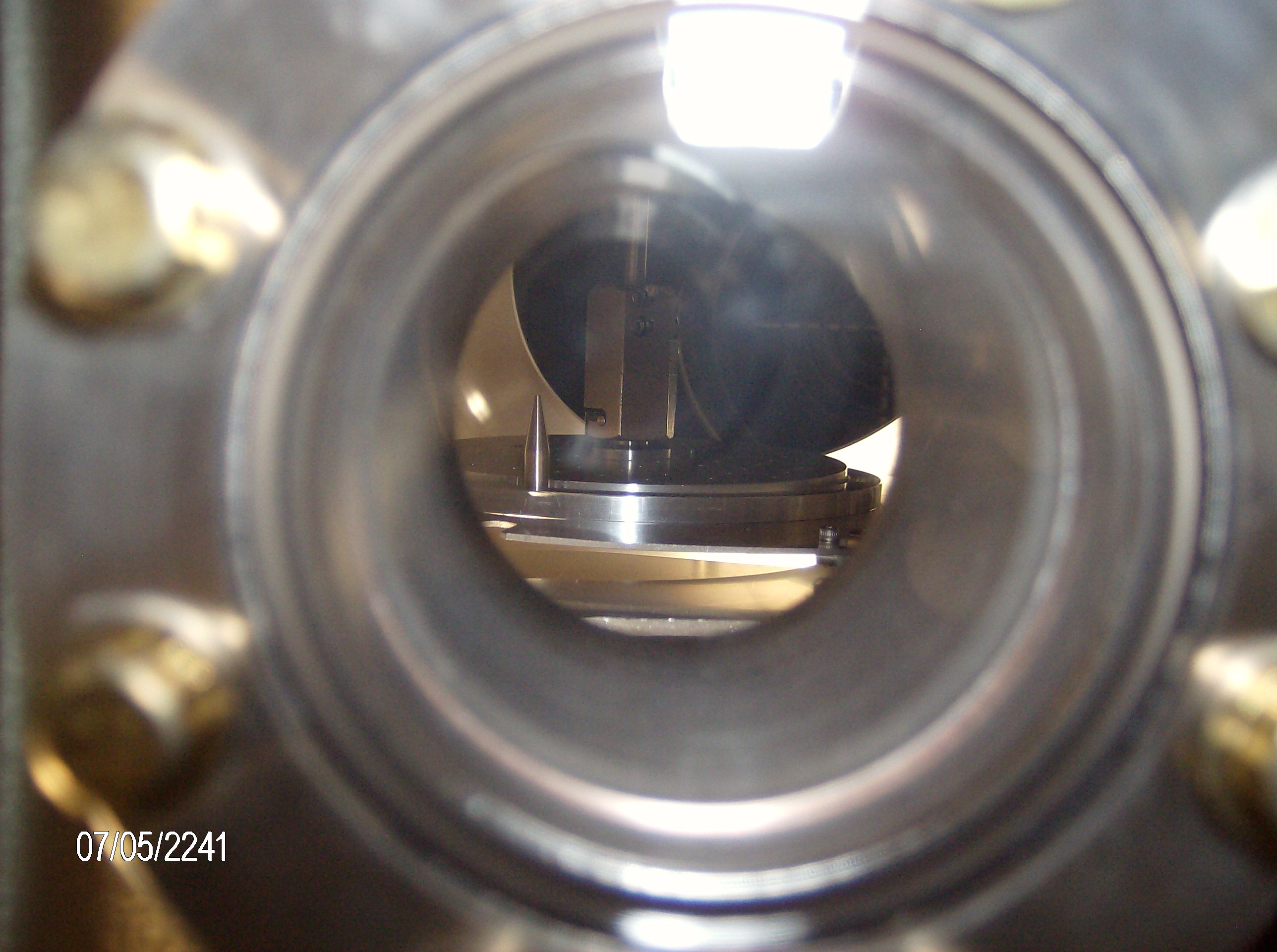 Figure 6: View through the top viewport of the sample being loaded on the sample stage inside the main chamber.

The sample is held on the sample holder with screws and washers (or clamps).  The sample holder is then fixed to the loading arm attachment using a twist lock arrangement as shown on figure 5.  When the Loadlock has reached a vacuum of 50 mTorr or less, the sample may be loaded into the main chamber:

The evaporation rate is measured using quartz crystals with a 6 MHz resonance frequency (Actually 5.950 MHz for a new crystal without deposition on it).  As material is deposited on the crystal, its frequency shifts depending on the mass and elasticity of deposited material.  Knowing the density of the material and its elastic properties allows calculation of its thickness.  The elastic properties of the material are represented by the Z-ratio (sometimes referred to as Z-factor).  The density and Z-ratio for common evaporants are summarized in the following density and Z-ratio table.  Additionally, a material independant geometric factor, referred to as the tooling factor, accounts for the different position of the quartz crystals and the actual sample on which deposition occurs. 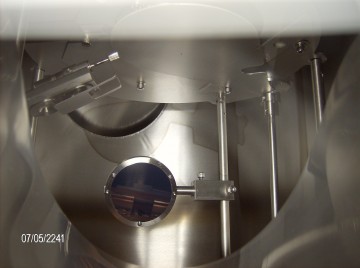 Figure 7: inside view of the main chamber. The 2 quartz crystal heads are visible on the left, a mirror in the center of the image shows the source. The closed main shutter is visible at the top of the image.

On the DeeDirectors evaporator, there are 2 crystals inside the chamber with a shutter to chose which crystal is used for any particular monitoring as show on Figure 7.  The crystal choice is controlled by the Thickness Monitor switch on the control box: Xtal 1 is the bottom crystal and Xtal 2 is the top crystal.

The quartz crystals are controlled with the Sycon STM-100 crystal monitor shown in Figure 3.  The crystal being monitored is chosen by the switch on the electronics rack located to the left of the STM-100 (also visible on Figure 3).  The monitor keyboard is divided into two separate groups.  The keys to the left are control keys and the keys to the right are programming keys.

Only the ZERO and LIFE keys are active on the left side of the keyboard as the shutter is actuated from the Thickness Monitor switch on the control box (Figure 4).  The ZERO key resets the thickness and timer to zero: it should be depressed at the same time as the main shutter is opened to accurately represent the thickness of the material deposited.  The LIFE key gives the user a measure of the remaining possible sensor crystal life expressed in percent.  A new crystal should indicate close 99% life and a frequency near 5.950 MHz.  A fully loaded crystal will indicate 0% with a 1 MHz frequency shift.

The STM-100 monitor can store information on 6 different film parameters for up to 9 different films.  Since the evaporator has 8 sources, each source is usually assigned a film number corresponding to its number on the sources carousel.  A sheet indicating which source is which should be found taped on the front of the evaporator.  Despite the preceding sentences, it is recommended that the user verify the film parameters prior to evaporation.  Depressing the PROGRAM key places the instrument in a mode where the parameter variables can be viewed or modified.  Depressing the PROGRAM key when in program mode returns the instrument to display mode.  The ENTER key is used to sequence through the 6 parameter variables (DENS, Z-FACT, END THK, SP THK, SP TMR and TOOL) and to save the value for these parameters when changed using the arrows  of the DATA keys.  The arrows are also used to select the active film.  At this point, only the DENS, Z-FACT and TOOL parameters are used as the STM-100 is only used to monitor the deposition.  The actual thickness is controlled by the user when she/he activates the main shutter (Shutter on the control box).

The electron beam is controlled using the Telemark controller.  The following is a common recipe for depositing a film (assuming the sample is already loaded).

Table of density and z-ratio for common materials 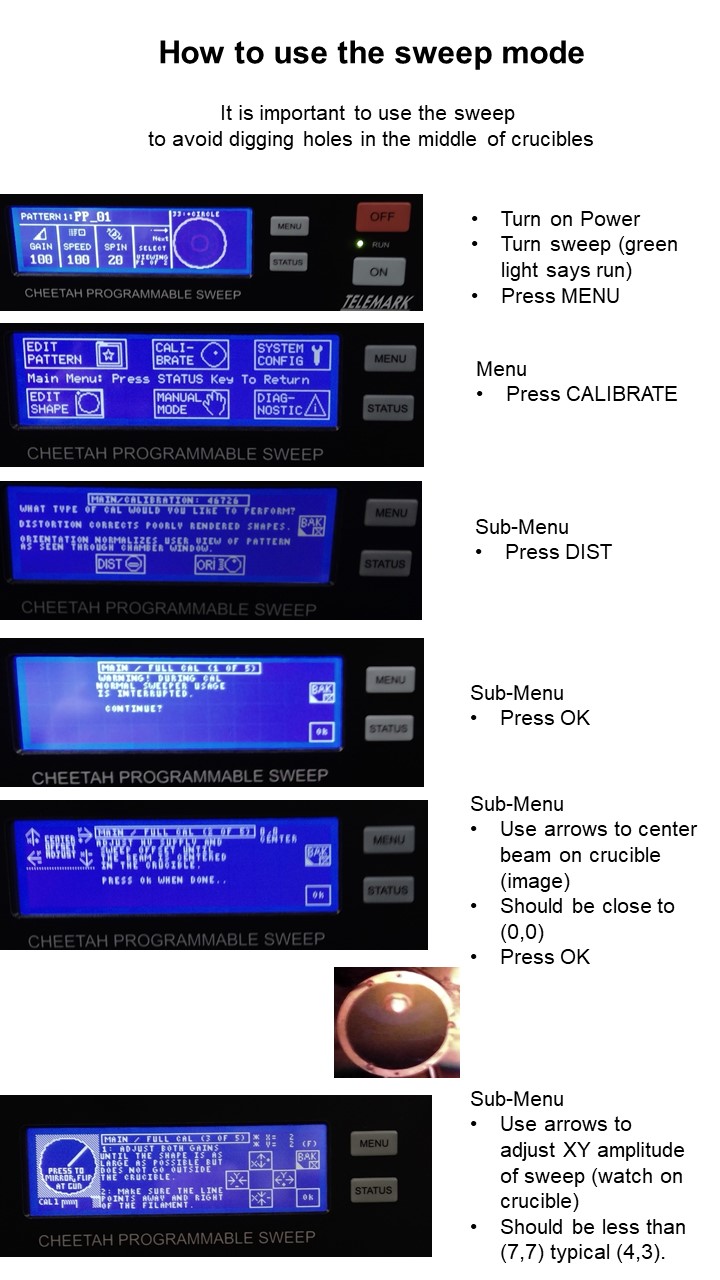